Maharishi and the Beatles

This is one of the very best reviews about the relationship of Mahrishi Mahesh Yogi with the Beatles we have read. Even if we are an Estonian website we kept the English version (although we also translated it at Maharishi ja Biitlid), because many may prefer to tead it in the original language.

Maharishi and the Beatles 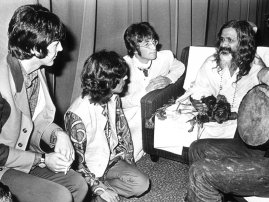 The New York Times article, “The Man Who Saved the Beatles,” written in response to the passing of Maharishi Mahesh Yogi (February 5, 2008), is a good starting point in retelling one of the epic stories of our time.

The Beatles first met Maharishi Mahesh Yogi in 1967, while the famed meditation teacher was on a lecture tour in England. They learned his Transcendental Meditation technique and over the following months spent several weeks studying with him in Rishikesh, India.

How meditation resuscitated the Beatles—for a while

The India experience and the Beatles’ meditation practice opened a floodgate of creativity for the band—“and got them out of what threatened to be a creative rut,” says the Times.

Describing the Beatles’ time with Maharishi as the most productive period in the band’s career, the article notes:

“That may seem an odd assertion, given that the group had only recently released Sgt. Pepper’s Lonely Hearts Club Band. But part of the point of that album was to overcome the inertia imposed by the stress of being the Beatles by posing as someone else: the Sgt. Pepper band. And although it includes some of the Beatles’ most extraordinary music (‘A Day in the Life,’ for starters), it had been a struggle to fill it. Lennon, after all, had based one song on the text of a circus poster (‘Being for the Benefit of Mr. Kite’) and another on a corn flakes commercial (‘Good Morning, Good Morning’), simply, he later said, as a way of fulfilling his quota. But after Rishikesh, the group found itself with more new songs than it knew what to do with.”

Beatles connoisseurs, audiophiles and music writers typically hold the White Album as the Beatles’ masterpiece. But fewer fans have connected the musical achievement of the White Album with the Beatles’ India experience or recognized the influence of “turning within” on renewing the band’s creative and lyrical power.

The process of meditation, as taught by Maharishi, is an effortless way of accessing “the infinite field of energy, creativity and intelligence that resides within everyone,” as Maharishi explains. Now, four decades after the Beatles discovered the creativity-enhancing effect of transcending, hundreds of scientists in leading medical schools and research institutes around the world have empirically verified that the TM technique stimulates creativity and benefits virtually every aspect of life.

Why did they leave?

The Beatles each told varying accounts about why they left Maharishi’s Transcendental Meditation Academy. A recent Times of India article quotes George Harrison as saying that Maharishi asked the Beatles to leave because of their drug use during the meditation course. True or not, Maharishi refrained from ever publicly shaming the Beatles.

There’s no question that John’s experience turned sour—not only with Maharishi, but toward the Beatles and his wife Cynthia as well. In the original lyrics of the White Album song “Sexy Sadie,” Lennon overtly criticized Maharishi. By all accounts, John’s accusations, ballyhooed by the press, turned out to be baseless.

After Lennon’s death (in 1980), Harrison and McCartney publicly commented on Lennon’s gripe against Maharishi. McCartney notes that negative rumors about Maharishi were spread by Alexis Mardas, who, says the Times, was “a supposed inventor and charlatan who had become a Beatles insider.”

“Magic Alex,” as he was known, apparently had agendas of his own (which included wanting to be known as “the Beatles’ guru”). According to many who were there, Mardas fabricated a denigrating story about Maharishi, and Lennon believed the rumors, at least for a while. Cynthia Lennon says in her biography that Mardas invented the tale to undermine Maharishi’s influence on the Beatles.

George Harrison commented: “Now, historically, there’s the story that something went on that shouldn’t have. But nothing did… There were some flaky people around back then and we were four of them.”

McCartney, in his biography, reaffirms that he did not believe the rumors and attributes them to Mardas. In a statement released at the time of Maharishi’s passing, McCartney said: “I was asked for my thoughts on the passing of Maharishi Mahesh Yogi and I can only say that whilst I am deeply saddened by his passing, my memories of him will only be joyful ones. He was a great man who worked tirelessly for the people of the world and the cause of unity. I will never forget the dedication that he wrote inside a book he once gave me, which read, ‘Radiate bliss consciousness,’ and that to me says it all. I will miss him but will always think of him with a smile.”

Ringo wrote about his experience with Maharishi in his book Postcards from the Boys, stating that he still meditates with the mantra Maharishi gave him and that his time in Rishikesh was “one of the best experiences of his life.” In February 2008, Ringo said of Maharishi, “One of the wisest men I met in my life was the Maharishi. I always was impressed by his joy and I truly believe he knows where he is going.”

THE HISTORY CHANNEL: Setting the Record Straight on
Maharishi and the Beatles

Even now, occasional press reports still refer to Maharishi as “guru to the Beatles” and suggest that Maharishi’s fame and success as a meditation teacher was related to the Beatles’ involvement.

It’s true that the Beatles brought much attention to Maharishi and to meditation in general, and many people did learn the TM technique when they first heard about the practice through publicity surrounding the Beatles.

However, after 50 years of the Transcendental Meditation program being taught to millions of people around the world, with more than 600 scientific studies verifying its benefits and $26 million in research funding from the National Institutes of Health, it’s obvious that the rise of the TM program in our culture has been due to the effectiveness of the technique itself.

Still meditating after all these years

Yoko Ono was also there, in the audience. She told Rolling Stone: “John would have been the first one now, if he had been here, to recognize and acknowledge what Maharishi has done for the world and appreciate it.”“Maharishi did good for us”

“I still practice TM,” said George Harrison in his later years. “Maharishi only ever did good for us, and though I have not been with him physically, I never left him.”  In 1992, Harrison organized and performed a benefit concert to support TM practice and other of Maharishi’s “consciousness-based” programs in the United Kingdom.

Paul McCartney and Ringo Starr also maintained their connection with meditation and re-established association with Maharishi’s non-profit organization. Paul’s musician son James McCarthy is also a dedicated TM practitioner, and often lends his support to the David Lynch Foundation‘s efforts to bring the TM technique to people in need.

John Lennon would never again see Maharishi in person, but a decade later Lennon telephoned Maharishi, according to people who were present, and apologized for the lack of respect that he—as a 27-year-old Beatle—had shown toward his meditation teacher.

What was “Sexy Sadie” really about?

Singer/songwriter Donovan was in Rishikesh with Maharishi when the Beatles came and went. He remarks in his autobiographical documentary, “The Journey of Donovan,” that John’s song “Sexy Sadie” was really about the Beatles and who they were at the time, and not about Maharishi.

Paul, George and Ringo—with their varying degrees of appreciation for Maharishi—insisted at the outset that John change the chorus and title of the song. George suggested “Sexy Sadie.” Perhaps in his heart John knew the truth and that’s why he acquiesced. Of course, there were dozens of other (positive) Beatle songs inspired by Maharishi and the India experience—such as “Dear Prudence” and “Across the Universe,” whose lyrics John considered to be the best he ever wrote.

It appears that Maharishi never harbored ill will towards the Beatles. Harrison’s trip to visit Maharishi in the Netherlands in 1991, described in the Times of India article, adds another facet to the story.

According to Beatles lore, when the band made their first American TV appearance, on the Ed Sullivan show, there was said to be virtually no crime in the U.S. for that entire hour. “When I heard this,” Maharishi told Harrison during this visit, “I thought of the Beatles as angels on earth. They created such music for the world. It doesn’t matter what John said or did. I could never be angry with them. I could never be upset with angels.” On hearing this response from Maharishi, Harrison wept, says the article.

Maharishi expounded for over 50 years on the true nature of life from the perspective of Vedic knowledge. Often referred to as “the Einstein of consciousness,” Maharishi revived a lost meditation technique and established the life-transforming benefits of effective meditation on the empirical ground of science, opening the doors to higher states of consciousness for the scientific age and generations to come. Never in recorded history has one meditation technique been learned by 6 million people during the teacher’s lifetime, and with such demonstrable results.

Maharishi opened the Beatles’ minds and hearts to a reality much greater than Sgt. Pepper’s Lonely Hearts Club Band. And it changed their lives forever.

Source of this article: http://meditationasheville.blogspot.com/2010/12/maharishi-and-beatles-what-really.html

Who was Maharishi—what is his role in TM?
Paul McCartney on Transcendental Meditation: Interview with David Lynch

Maharishi on the experience of transcendence and meeting the Beatles